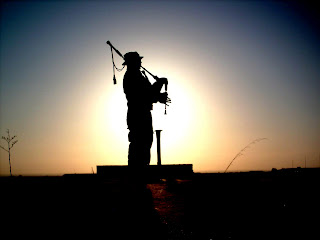 OK so most people that know me know that I like the Bagpipes. Well I got some almost two years ago but that's not where my obsession really started. When my brother Jayson was in high school he was in a musical called Brigadoon. For those of you who don't know its about a little town in Scotland that appears once every 100 years. For me the highlight of the whole show was during the wedding scene when a bagpiper would walk down the isle playing some wedding song. I don't know how it is for other people but when I hear music that I really like it make me tingle every where. Well this was one of the first times that has ever happened to me.
Later when I was about 18 or 19 my parents gave me a practice chanter for Christmas that is of course after I had asked "Santa" for bagpipes for about six years. With the practice chanter I was able to learn not only that bagpipes are hard to learn to play but also that is was going to be a long time before I was going to be playing anything with a bag.
I went to college and brought my little chanter so I could continue to learn. Little did I know there was a girl there at BYU-I (Ricks at the time) that played bagpipes. One day I was walking home from school and I heard her playing in the distance. The fortunate thing about bagpipes is that the noise can carry for very long distances. I tracked her down and she was able to show me that I was learning to play the pipes all wrong. She gave me some pointers then we went our separate ways.
I went on my mission, got married, had a couple kids, joined the Army but still didn't have any bagpipes. The main reason after all those years and no pipes was because they are SOOOOOOOO expensive. To get a set of wood pipes without any adornments or anything but wood would be about $1,000, anything fancy is about two to five thousand dollars more. But still I had my chanter and some day I was sure to get a real set.
Thanks to advances in technology in plastics, Bagpipe manufactures were able to make pipes with plastic instead of wood. They still make the pipes in the same fashion with a lathe and other carving tools the only difference was they used plastic instead of wood.
In September of 2006 I was scheduled to go to Iraq. My mother thinking that I needed something cool to do wile I was out there decided to get me a set of these plastic pipes. When the eventful day arrived and the bagpipes were here I couldn't wait and took them out immediately filed the bag full of air and squeezed the bag with all my might. The ensuing noise that came forth from the carefully crafted instrument should be (in my opinion) against the law in all fifty states and Canada. It will haunt my dreams for the rest of my life. The shear looks of horror and terror that where on my children's faces is burned like a brand in my mind. Needles to say I sucked. After all those years of practice and dreaming, I never thought I would sound so wrong.
fortunately for my wife and family I went to Iraq to practice and I had 15 months of nothing but time. Now I can almost sound like a real piper I think to most people I would but to a trained ear probably not. 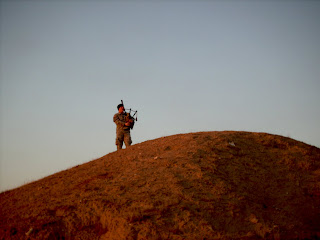 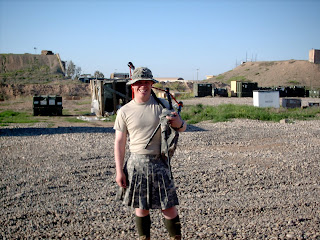 Are you sure you should post such hot pictures of yourself in a kilt? You might be breaking some hotness laws somewhere honey bunches!

And you better keep practicing, or I'll send you to your room without any dinner.

I'm counting on you playing at my funeral so keep practicing. Oh, I'm not planning on dying anytime soon so you've got lots of time.(I Hope) You've got a wonderful Mom who continues to encourage and help you to develope your talents. Love the Pictures!

You could make a sweet sweet children's book called the Miracle of the Pipes, or how the Pipes conquered Asia.

This post made me laugh so hard! I can just see the images of your children in my mind. It's a good thing you didn't have any dogs remotely close as you probably would have put them into cardiac arrest!

All I wish is that some day we are stationed in the same place. I really think our families need to meet.

I, the fake mother in law grin, have heard the pipedness of Joel and can duly testify that you do no longer suck. However, your camo kilt is on backwards.

Sweetie pie are you ever going blog again? Are you just a three post wonder? Come on!! We need your point of view.

Look at those bare knees! You know, I would pay a lot of money to see a picture of your family's faces when they first heard you play. Did anyone have a camera at the time? And where can I get a couple kilts for my boys?