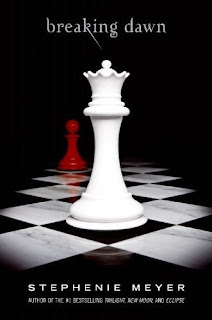 Yes first off I know that I haven't blogged in a wile I think Tobi might be marking off the days on the calender, counting how long it takes for me to post again. My only excuse is that I have no excuse. So now that I have that out of the way I come to the real reason that I'm blogging today (that is the real reason other than Tobi pestering me). As you might have read a couple of blogs ago I like to read. One of the things I like about reading is anticipating what a new books will be about. Part of that is coming up with theory's (most of which are completely wrong) about what will happen. So I have decided to share my theory's that I have about Breaking Dawn the fourth book in the Twilight series.

First is the really big question of whether it will be Edward or Jacob. I think that most people would agree that Edward is going to end up with Bella at the end. But I also think that we would all agree that that pretty much stinks for Jacob. I hope that in the end Jacob will end up imprinting on someone maybe Leah Clearwater. It seems like she should have a happy ending too. But on the other hand if someone dies I think it would be Edward.

The other big debate is whether Bella will become a vampire. I think she will or maybe I should say that I hope she will. I have to admit that I will be really disappointed if after all four books she still isn't a vampire at the end. If she isn't a vampire at the end of the book than I think that Edward will definitely be dead because she will have no reason to change herself.

Also there is the whole Volturi issue. I think that the Volturi will come back and either try to get rid of the Cullen family or the Werewolf pack or both. Either way there will be fighting and the Volturi will be involved.

So there are a few of the theories that I have right now. If you ask Tobi she'll tell you that they change at least once a month or so. But I thought that if I wrote them down then I can look back and see how well I did at my predictions.
Posted by Joel at 11:41 AM

I don't like it when you predict that Edward is going to die. However I liked that you said I pester you rather than nag. Thank you for blogging again Joel.

You are so wrong about the end of the saga. No way is Edward going to die, and no way is Bella going to become a vampire. I actually through my psychic abilties know exactly how it's going to end. Sorry, I promised Steph I wouldn't reveal it to the world as yet.

I think Edward is going to become human some how. I agree about the Volturi, but I think Bella will stay human and marry the human Edward and they will grow old together. I think Jacob is so over, that she may kill him off just to end the love triangle. I don't care what happens to the she wolf because she really is an un-likable character. (I don't like spitefull people). Loved your predictions though. Now that mine are logged, we will see who is the clairvyant and who is the vampire prediction queen!or King!

I think Edward is finally going to be able to read Bella's mind. And like the rest of us, he'll realize that she's just a silly, self centered, immature teen and so he'll move on to a more mature relationship with someone else.

Bella and parents will go for family therapy, they'll all finally grow up, be honest with each other and also responsible.

Okay, I just made all that up. Of course I'm reading the book and very soon.

My ideas for the book (before I started it) were that there was no way Bella could become a vampire as it would cost her the ability to have children and her mortal parents. Obviously my theory was wrong and all is in tact. Yipee!