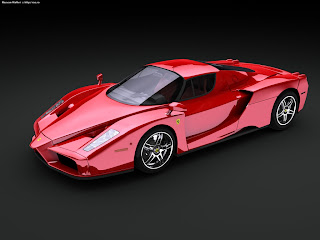 Spoilers are in "quotes" if you want to read them highlight them with your mouse.

Ok so Breaking Dawn. I loved it! I'm not sure what everyones deal is I really couldn't think anyway to make it better. Well I guess there could have been cool car chase scene where Bella was driving at speed upwards of 250 miles an hour"hence the cool Ferrari picture". That or maybe as Edward was running to save someone he breaks the sound barrier and Charlie hears the sonic boom.
I think for a lot of people they where looking for some literary masterpiece or something. It could have been a really crappy story and I would have still loved it as long as it had a good ending. The reason is because after the first book as long as "Bella became a vampire" I would have liked it. Thats because I liked Twilight so much that all the books that followed I would have enjoyed just for the reason that I was getting the rest of the story. It was a good book.
I also liked the surprises in this one there where things in it that I would have never guessed"like Bella getting pregnant or Bella having an easer time with the thirst then the others" Another thing that I liked about this one (and this is something I don't consider a spoiler) is that there was more than just Bella's perspective in the book. I'm really looking forward to when the Midnight Sun comes out because it would be cool to get Edwards perspective on the beginning of their relationship. I guess I should admit at this point that I have read the book once and listened to it once. I read it first so I can know what happens in the book and I listen to it so I can get the details that I missed in my fever pitched reading frenzy.
Posted by Joel at 4:43 PM

I don't know what the big deal is either Joel. I read one woman's hate filled review and she is now spending countless hours researching how The Book of Mormon has influenced Stephanie Meyer's writing of the Twilight books because the books are so prejudicial against indians and women.

With the internet and the ability for everyone to put their opinions out there you've got to have a really thick skin to be in the public eye.

Stephanie is not a a great writer but she's a pretty darn good story teller.

I must admit that there were two things about this latest book that were annoying to me:
The babies name and the birth scene. The first is silly and hard to pronounce and the second was truly gross and enough to put anyone off have children.

Hey Shmoel!! I am so proud of you for coming out of the Twilight closet. There is no shame in it. After I had been married for about two seconds I came out of the Star Wars closet. I figured that after he married me Mike should be let in on the secret. He hasn't ever judged me. Your big sis Alicia.

Hi again Joel, I'm getting my own account and I'm trying it out on you.

Score for you! You got a comment from the internet shy Alicia! Go Joel! You are my Twilight source of knowledge and power!

I have to agree that Renesme is a ridiculous name, which is why, I'm convinced, everyone in the book decides to call her Nessie. But Bella is known to make bad decisions so her poor naming abilities is only to be expected.

But I hardly think that a real birth is more gross than a vampire birth, especially a C-section. It is supposed to be the most bloody surgery.