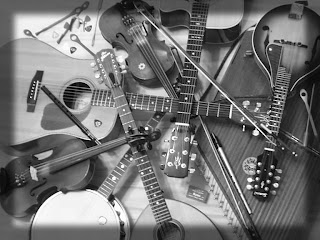 I'm sure most of you that read this blog know that when I move to Colorado I'll be deploying a few months later to Afghanistan. This will only be my second time getting deployed since I joined the Army. I would like to think that I have started a few good traditions. For example before I go out to another country its vital that I amp up my personal technology inventory. Some might ask "Why would that be important?" To these people I say why not?!!! Technology Rocks!!! Another tradition that is integral to getting deployed for me is the consolidation of the socks. I only have two different colors of socks that I wear when I go but I have so many its daunting sometimes.

However the reason for this post is the most vital of all the deployment traditions! What instrument will I be mastering while I'm gone? As you know the last time I deployed I learned how to play the bagpipes which by the way I will most definitely be taking with me when I leave. But since the United States Army has afforded me the opportunity to spend a period of approximately 12 months of potential instrumental enrichment. I had better use it.

So I thought I would ask the people that know me what they think my next acquisition of musical ability should be. I thought perhaps I might become more proficient at a current instrument I already own like the violin. I can play songs on the violin but not well or with any hint of aesthetics. Or perhaps I could take a keyboard and increase my slight piano skills. On the other hand I could make a new instrument purchase with something I've never attempted before ( Tobi says the french horn is a no-go.....drat!!). One instrument I've always been curious about is the Banjo. It looks fun but I've never really gotten to sit down and go to town with.

I would love to hear what different ideas you have.
Posted by Joel at 4:20 PM

In knowing you and the things you like, I would suggest a LYRE. It is a fun and small instrument you can travel with. You like to experience the strange (maybe not the best word to use (UNIQUE) things life offers. The plus side of it all Tobi won’t complain that it is loud too.

I find the interment to be very historical in not only in Greek Mythology but that if all historical and powerful to listen too. Hope you consider my Idea.

It's a good thing that your taking the pipes. You know how I feel about that. I think you should work on a smaller instrument. How about a piccolo? I guess a harp would be a little awkward and costly. Come to think of it a piccolo might cost a lot as well. I'll have to think about that one.

I was going to suggest a mandolin or a lute, but those are probably prohibitively expensive (cool, though)(also, I have no idea what instruments you've currently learned). Piccolos are fun and really easy to carry with you whereever you go (they fit into most any pocket). You could probably buy one for a reasonable price on ebay, though obviously (as with any instrument) the good ones will be expensive.

Dude, you have to play the drums. Period.

I vote for the drums. I can see into the future and I see the dude beating the skins when you get back. Also a plus for all Grandma's everywhere, it makes almost as much noise as the Bagpipes.
You also need a cool pair of leather pants to play drums, and a tye dyed t shirt would help too.

Banjo, so much fun to play and listen to. Blue grass and Afghanistan seem like a good combination. I have a friend who is a self taught Banjo player and who now teaches others to play. Keep improving on those pipes too as I'm counting on you playing at my funeral which hopefully isn't anytime soon.

The banjo would be the epitome of awesome, but you would have to take into consideration how your roommates and neighbors will feel about it. Its no worse than pipes i guess.

I think you should learn some fiddle. Violin is for sissies, but the fiddle is for men!

Also, as a side note, you can always tell if someone is edumacated or not by the way they pronounce epitome.

Hellloooo!? Who's going to vote for the didgeridoo?! To play the most awesomest of awesome instruments, you need to be able to exhale and inhale at the same time! That says time consuming to me! Plus,Justin and Ian(being lovers of all things australian)would think you were the coolest uncle ever!

I'd recommend the Jew's Harp.

After all, you are a member of one of the twelve tribes.

Check 'em out on Google. Small, light, easily concealed, and playable in an entire band of the same instrument.